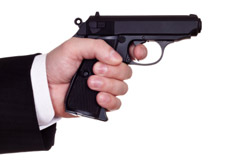 Laws affecting a citizen's right to bear arms are constantly evolving. Just recently a federal judge in the U.S. District Court, Central District of Illinois, Springfield Division, granted a motion for the dismissal of a challenge of the statewide ban on the carrying of a firearm for personal protection. Our constitutional rights are constantly being challenged and amended making it more important than ever to seek a qualified Chicago gun crime defense attorney if you have been charged with a gun crime.

The state of Illinois has extremely strict gun control laws that many citizens are not entirely aware of. For example, it is illegal to carry or possess a firearm, stun gun or Taser in any place that is licensed to sell alcoholic beverages. Weapons charges result from what is considered an unlawful use of a weapon, such as reckless discharge of a firearm, possession of a weapon without a permit, or possession with the intent to harm another person or commit a crime. Even possessing ammunition can result in a weapons charge.

Persons charged with unlawful use of a weapon, specifically a handgun or any other type of gun need to be aware of other recent changes in the law. Probation is no longer available, even for first time offenders, for those charged with unlawful use of a weapon (UUW) in Illinois, unless they possess a valid firearm owners identification card (FOID), unless the person charged is under the age of 18. You need someone like David L. Freidberg who constantly monitors the ever-changing laws regarding UUWs.

Illinois is the only state that currently bans individuals from carrying concealed firearms. Recently that law has been appealed and the Illinois legislature has been ordered to allow the carrying of concealed weapons. But that law has yet to implemented and you can still be charged with unlawful use of a weapon even if you own a FOID card. The other 49 states allow concealed carry permits, with requirements and regulations varying by state. Recently the U.S. House of Representatives passed H.R. 822. This is called the National Right-to-Carry Reciprocity Act of 2011, which allows individuals with valid state-issued concealed carry permits to carry a concealed firearm across state lines, as long as that state allows concealed carry.

David L. Freidberg understands that in law enforcement's fight against crime, they can become overzealous in their interpretation of what constitutes a valid weapons charge. Many Weapons Charges are the result of police performing an illegal search of a person, home or vehicle. By effectively arguing that the evidence obtained and subsequent arrest was based on an illegal search and seizure, we are able to get many Weapons Charges dismissed.

The Law Offices of David L. Freidberg will go to great lengths to protect your rights and make sure judicial proceedings are followed to the letter of the law. Contact us today for a no-obligation, initial consultation with an experienced Criminal Defense Lawyer to discuss your Weapons Offense Charges.