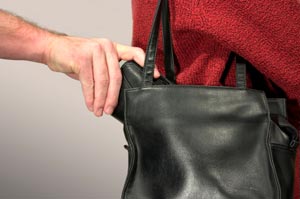 The crime of theft comes in many shapes and forms. There are a variety of ways to commit theft, and the more serious the conduct and the value of the item taken, the harsher the punishment will be in both jail time and fines. Oftentimes, when people are charged with theft or other crimes, they do not seek the advice of an experienced Chicago criminal defense attorney soon enough. These people may believe that they can defend themselves and accept the punishment allowable under the law. This is very risky, as you may be facing significant punishment. Therefore, it is imperative to consult with an attorney the second you are able to make a phone call after being arrested and taken to jail. Your constitutional rights are at risk when you are arrested, and a Chicago criminal defense attorney can fight to ensure your rights are protected.

Some of the more common types of theft in Illinois include the following:

Theft is broadly defined, and the crime can be very minor or petty, or the crime could involve hundreds of thousands of dollars and a jail sentence. Because of such variation in the severity of theft, it is essential to speak with a Chicago theft defense lawyer who can thoroughly evaluate your case and provide you with all of your options. A minor theft conviction may be overlooked by prospective employers, school admission offices, or counselors if the crime was not recent, and if the value of the item in question was not that significant. However, even the most minor of criminal convictions on your criminal record can cause you problems for years to come in terms of obtaining employment, going to school, and renting an apartment or house.

Range of Penalties for Theft in Illinois

The range of penalties for theft crimes can be different based on the set of circumstances that led to the criminal charge. For example, stealing property directly from another person can be much more serious than simply stealing property that is standing alone (such as an unoccupied car), with no people around. Further, the location of where the property was taken is also a factor that may make a theft charge more severe. For example, if property is taken in a school, or in a place of worship, the penalties may be harsher than if the property was taken in a public place. Also, if governmental property is stolen, this may enhance the penalties for the theft charge. You should also be aware that if property is stolen from an elderly individual, this could certainly enhance the penalties if the charge results in a conviction.

In addition to the potentially harsh consequences described above, if you are convicted of theft you may be liable for civil penalties. If the property stolen belonged to another person, you may be liable for the actual value of the property in addition to other fees that may be imposed by the court. To have a better understanding of what you may be facing with your particular theft charge, you should speak with a theft defense lawyer serving Chicago who is highly skilled in the area of theft crimes. There are many factors that can make the punishment much worse. Therefore, the sooner you consult with an attorney, the sooner you will be able to resolve your criminal matter and move on.

If you or your loved one has been charged with theft, no matter how serious the charge may be, you should speak with a theft defense lawyer in Chicago as soon as possible. A skilled and seasoned attorney will determine if the theft charge against you is legitimate, and whether or not your arrest was lawful. David L. Freidberg is a Chicago-based criminal defense attorney with more than 20 years of experience fighting for his clients’ constitutional rights. Many people don’t fully understand what their rights are after being arrested and charged with a crime. With the guidance of David L. Freidberg and his legal team, you will be increasing your chances of resolving your criminal matter without serving jail time or paying hefty fines. Our office is available 24/7, and our attorneys are standing by to provide you with the legal representation you deserve. To schedule a free confidential consultation with David L. Freidberg, contact our office today by calling (312) 560-7100, or you may contact us by email , and we will respond to you as soon as possible.