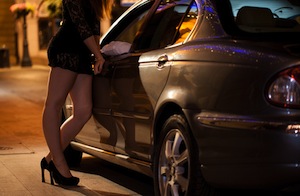 Although many people throughout Illinois and the United States do not consider prostitution or the solicitation of a sexual act or a prostitute to be a serious offense, a person facing charges may have to deal with very serious repercussions, including jail time and a permanent criminal record. For example, a person who is charged with solicitation faces criminal penalties that often are more severe than the person being charged with prostitution. A first offense where a person offers to pay money in exchange for a sexual act may be charged as a Class A misdemeanor, but any subsequent offense will be charged as a more serious crime, such as a felony. See 720 ILCS 5/11-14.1. If someone is caught up in a prostitution round-up and arrested for solicitation, whether through an internet advertisement or in-person contact, it is critical to retain an experienced criminal defense attorney as soon as possible.

Chicago criminal defense attorney David L. Freidberg has spent nearly two decades working to minimize the negative impact that a criminal charge can have on a person’s life, including getting charges dismissed in many cases. Mr. Freidberg represents clients throughout the Chicago, Illinois area. He approaches each case with the intent of zealously advocating to protect his client’s rights. By developing a careful legal strategy and drawing upon the resources of his office, Mr. Freidberg is able to offer an effective defense. The Law Offices of David L. Freidberg are founded on the principles of doing everything possible to preserve the liberties and freedoms of his clients.

Pursuant to Illinois law, a person may be charged with solicitation of a sexual act if he or she offers another person, who is not or her his spouse, money or an object that has intrinsic value in exchange for a sexual act. The act may include sexual penetration, touching or fondling of the genital area, or other contact that is intended to result in sexual gratification. In addition, a person may face charges if he or she makes an offer or agrees to meet for a sexual act through online communications, which is the basis of many criminal charges, especially through the use of internet sites such as craigslist or online chatrooms.

Upon conviction for a second offense for solicitation, a person may face penalties relating to a Class 4 felony. This serious crime can lead to a three-year prison term, as well as a large legal fine. An experienced criminal defense attorney may be able to negotiate a reduction of the charges down to a misdemeanor or get the charges dismissed entirely based on evidentiary or procedural charges.

In addition to the misdemeanor or felony charges, if the offense that led to the charges of solicitation of a sexual act or prostitution involved a vehicle, that car or truck can be impounded as part of the criminal act. It may cost up to $2,000 to retrieve the vehicle and that may only be refunded upon presentation of evidence of an acquittal on the charges or a dismissal of the case.

It is important to avoid a guilty plea on solicitation charges if it is at all possible to avoid it. This means that a person who has been charged with solicitation needs an effective and experienced defense attorney. A solicitation conviction can result in professional and social stigmas that prevent a person from leading the life that was possible before the arrest. A conviction of a felony crime also can prevent a person from obtaining certain loans, professional certifications and licenses, and even specific types of housing. However, there are many different ways to defend against these charges.

When a law enforcement agency is pursuing solicitation charges, it usually involves many different officers and multiple arrests. There often is a lot of pressure to make the “sting” an effective use of police resources. This may lead to behavior that is referred to as entrapment, where the police officer prompts a person to engage in criminal behavior that he otherwise might not have done on his own. If this happened, then there is a strong defense that can be mounted against the charges. Many times, prosecutors are overwhelmed with the logistics of dealing with the fallout of a sting operation. Specifically, overworked prosecuting attorneys cannot handle an additional 40 or 50 cases that drop on their case load at one time. This makes them very willing to discuss a dismissal of charges against first-time offenders, especially when the defense attorney has a good working relationship with the prosecutor.

In addition to the potential for a dismissal of charges for someone who never has been arrested on these charges before, there are other defenses that may be raised, including arguing that the defendant was arrested because of entrapment. Further, there may have been a violation of the defendant’s constitutional rights that may result in a dismissal of the case. There also may have been an assumption made by the police that was inaccurate. In essence, this defense is based on a misinterpretation of the facts of the case. Of course, any defense will be based on the unique circumstances of each case.

A person who is arrested and charged with solicitation of a sexual act or solicitation of prostitution faces jail or prison time, legal fines, professional restrictions, and personal stigmas. It is possible for a person to be publically shamed by the posting of his picture and personal information upon conviction under certain laws. Therefore, it is critical to retain an experienced and aggressive criminal defense attorney as soon as possible. David L. Freidberg knows how to present a strong and effective defense based on the unique circumstances of the arrest. At the Law Offices of David L. Freidberg, we are dedicated to pursuing every avenue of defense in order to protect the rights of our clients. Contact the office at (312) 560-7100 or (800) 803-1442 or send an email to dfreidberg@freidberglaw.com in order to schedule a free consultation. We will respond to your inquiry promptly. We are available 24/7 for your convenience.