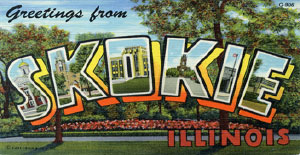 Skokie is located in Cook County approximately 15 miles north of Chicago. Skokie has a bustling population of around 65,000 and is a continuation of the Chicago street grid, which is served by the Chicago Transit Authority (CTA) or the El as its residents commonly call it. The village is bordered by Evanston to the east, Chicago to the southeast and southwest, Lincolnwood to the south, Niles to the southwest, Morton Grove to the west, Glenview to the northwest, and Wilmette to the north. Much like Chicago, Skokie is renowned as a destination for high-end shopping and dining. Skokie is home to Old Orchard Mall, home to stores such as Bloomingdales and Nordstrom, among other well-known boutiques. Community policing is handled by the Skokie Police Department with assistance from the Evanston and Glenview Police Departments. Unfortunately, much like Chicago, Skokie is not immune to gang activity. Additionally, crimes occurring in Skokie include anything from possession and delivery of controlled substances to murder. And because of Skokie’s proximity to Old Orchard Mall, there are more than a few arrests for retail theft, or shoplifting. Charges for crimes committed in Skokie and the surrounding areas are held at the 2nd District Courthouse, 5600 Old Orchard Road, Skokie, Illinois. Preliminary hearings are held in courtroom 105 with regard to Skokie, Evanston and Glenview felony offenses. However, there are cases where arrests occur in Chicago, those preliminary hearings are held at Branch 42, located in Chicago at 2452 W. Belmont Avenue. Because of overcrowding at the 26th Street courthouse, these Chicago cases will have their trials held in Skokie. This will only occur if a finding of probable cause is found at Branch 42. In those cases, the matter will be continued over to courtroom 101 at 26th and California, where the Presiding Judge will assign the case to be heard a week later in Skokie.

The Cook County Jail will house inmates charged with a felony having occurred in Skokie, Evanston or Glenview. The Jail is conveniently located across the street from the main courthouse at 2650 S. California, Chicago, Illinois. Bond Court will also be held at 26th and California for all Chicago matters. Inmate location and charging information can be obtained via the Inmate Locator. This locator will also provide information regarding the amount necessary to post in order to have an inmate released from custody. This jail is intended for holding inmates pending preliminary hearing, arraignment and future court appearances. Others arrested for misdemeanor criminal offenses in Skokie and the surrounding areas may be taken to one of the many local municipal police stations. Those arrestees are commonly released on an I-bond (no money to post) or a small D-Bond (10% to post for release).

The Chicago Police department utilizes pod cameras and sting operations targeting Mob Action, Lewd Conduct offenses and responds quickly to reports of theft or violence in the area. There are often officers located at the Old Orchard Mall where there is a small station located within the property due to the high volume of arrests.

Skokie Criminal Law Attorney David L Freidberg is a zealous advocate for his clients with over 20 years of criminal defense experience. Throughout his many years of practice, Mr. Freidberg has established key relationships with the Skokie, Evanston and Glenview law enforcement agencies and the States Attorney’s Office and is well thought of throughout the Court system as a fierce defender of his clients' rights. Our office is available 24/7 for your convenience. Contact Mr. Freidberg immediately at (312) 560-7100 if someone you care about has been charged with a crime in Skokie or its surrounding areas. Your liberty and rights are of utmost importance and we are here for all of your legal needs.