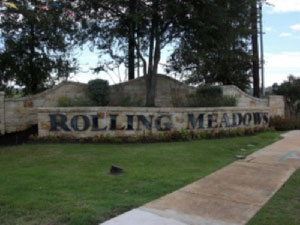 Rolling Meadows, a small suburb located in Cook County, sits a mere 24 miles northwest of Chicago and is grouped into the larger Chicago metropolitan area designation. Rolling Meadows has approximately 24,000 residents living on only 5.64 square miles. Many Illinois residents migrated from Chicago in order to enjoy a safer and quieter life in Rolling Meadows. However, despite its small size, Rolling Meadows still experiences its fair share of crime. In 2013, 17 death investigations were conducted, including an attempted murder of a police officer, as well as 6 arrests for forcible sexual assault, 6 arrests for robbery, 11 arrests for aggravated battery, 21 arrests for burglary, and 245 arrests for theft.

The Rolling Meadows Police Department is divided into multiple divisions. The Operations Division provides 24/7 monitoring and investigation service to the community. 31 officers and 6 sergeants are tasked with monitoring home alarms for burglaries, patrolling for theft, processing evidence, investigating suspicious activity, responding to 911 calls, assisting with domestic violence complaints, enforcing traffic laws, and appearing in court to testify in misdemeanor, felony, and traffic cases. The Patrol Unit is tasked with responding to 911 calls. Over 9,000 calls are made to 911 annually in Rolling Meadows. The patrol officers respond at the scene, assist with diffusing dangerous situations, and conduct investigations and arrests. The Investigations Unit is dedicated to major cases, such as suspicious deaths, bank robberies, armed robberies, predatory criminal sexual assault, and narcotics. In addition, the Investigations Unit often assists the Illinois State Police with conducting investigations and providing SWAT services during emergencies.

While Rolling Meadows is a relatively quiet community, a variety of different offenses are committed regularly in Rolling Meadows, including theft, robbery, burglary, battery, and criminal sexual assault. These are described in more detail, as follows:

These offenses can be misdemeanors or felonies depending upon aggravating circumstances such as the presence of a weapon, previous criminal history, and the status of the victim.

If you have been charged with a felony or misdemeanor in Rolling Meadows, Illinois, you face serious time in either state prison or county jail. With incarceration come lasting and devastating effects on your life. You need a skilled and experienced criminal defense attorney who is familiar with the Third Municipal District Courthouse in Rolling Meadows. David L. Freidberg has represented countless clients wrongly accused of offenses in Rolling Meadows and understands how stressful and confusing the process may be for you. Our attorneys are ready and available to answer your questions about your charges, explain your various options, and work alongside you to craft a defense strategy to fight the accusations. We have offices in Skokie, DuPage, and Chicago and is available 24/7 to assist you with your case. Contact The Law Offices of David L. Freidberg at (312) 560-7100 or (800) 803-1442 for a free case evaluation.