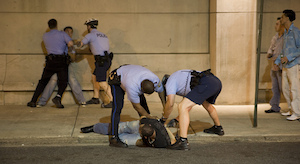 Resisting arrest is one of the most common misdemeanor offenses charged in the state of Illinois. Most arrested for this offense are initially approached by the police for some other type of conduct. For instance, police might be responding to an assault complaint. When the officer attempts to arrest someone and they refuse to put their hands behind their back or run away, they can be charged with resisting arrest.

Resisting arrest is a vaguely defined crime under Illinois law, encompassing a wide array of behavior and thus leading to a large number of arrests for the crime each year. This misdemeanor charge holds the potential for jail time, probation, monetary fines, community service and significant consequences for your future. Under certain circumstances, if injury occurs to the police officer, fire fighter, or correctional institution employee while you are resisting or obstructing, you could be arrested and charged with a felony offense. With the assistance of a skilled resisting arrest defense attorney, however, you can mount a strong defense against the charge of resisting arrest.

An Overview of the Crime of Resisting Arrest in Illinois

The statute further defines correctional institution employee as essentially any person employed to supervise and control inmates, whether they be in jail or awaiting a bail setting. Firefighters include anyone employed by the Office of the State Fire Marshal to conduct arson investigations.

As is evident from the language of the statute, the crime of resisting or obstructing an officer is extremely broad. It encompasses any sort of behavior that interferes with performance of a duty. This makes it a commonly charged crime, leading to thousands of arrests each year. Resisting arrest can take many forms, but most often involves a person who refuses to peacefully consent to arrest. All individuals are required to obey an arresting officer and allow themselves to be arrested without a fight. Clearly, when a defendant runs away, strikes an officer, or eludes the police, they can be charged with resisting arrest. Other actions that give rise to the charge are less obvious, however. Individuals are sometimes charged with this crime after merely pulling their hands away slightly while being handcuffed, refusing to put one’s hands behind their back, refusing to lay down on the ground, refusing to put hands on the squad car, and the like. Sometimes, the original charge lobbed against the defendant is later found to be lacking in probable cause. However, this will not serve as a valid defense against the charge of resisting arrest.

Obstructing police, on the other hand, generally involves getting in the way of police officers or firefighters. For instance, when police officers are investigating a crime scene and people begin gathering in a manner that makes the investigation more difficulty, they may be charged with obstructing the police if they do not clear the scene when instructed to do so. Further, providing the police with false information or hiding important evidence can be considered obstruction as well.

Resisting arrest, a Class A misdemeanor, is punishable by up to one year in jail, a $2,500 fine, or both. A sentence of supervision is not available for this crime, making the minimum sentence a conviction which will create a permanent record that cannot be expunged.

720 ILCS 5/31-1 additionally requires that anyone convicted of the crime be incarcerated for at least 48 hours and perform no less than 100 hours of community service.

If a peace officer, firefighter, or correctional institution employee is injured due to the defendant’s attempts to resist or obstruct, it may be considered a Class 4 felony. A Class 4 felony is punishable by a prison sentence of one to three years along with a fine of up to $25,000.

In addition to possible jail time, fines, fees and court costs, and community service, a misdemeanor conviction for resisting arrest could lengthen your sentence if you are ever convicted of a subsequent offense. Accordingly, anyone charged with the crime should take it seriously and consult with a knowledgeable defense attorney as soon as possible to maximize your chances of a successful defense.

Take Action Immediately to Defend Yourself Against Resisting Arrest Charges

People who are charged with resisting arrest should retain legal representation from an attorney experienced with resisting arrest defense. The sooner that you are represented by an experienced criminal law attorney, the soon an investigation can be initiated resulting in a stronger criminal defense strategy. Your criminal defense lawyer and legal team will promptly investigate the facts of your case and interview all witnesses who may have seen you arrested and subpoenaing the police car video as well as any traffic camera film or security footage. These important details about the events of your arrest will help us advise you as to the best course of action. Your lawyer will work hard to have your charges dismissed, fight the charges at trial, or try to negotiate a plea deal. It is essential that you act quickly so the best criminal defense may be developed.

Defense lawyer David L. Freidberg has decades of experience in his criminal law practice helping people charged with resisting arrest or other obstruction offenses. Our criminal defense attorneys have a thorough working knowledge of the laws concerning resisting arrest charges. We also understand how to review the facts of a case to determine the best possible defenses. Our legal team of attorneys and support staff will investigate each aspect of your case and this often leads us to uncover vital exculpatory evidence. Our attorneys are very aggressive and will often file motions to have all charges dropped. We defend against misdemeanor charges the same as we would a felony charge, because we know the serious repercussions even a misdemeanor charge can have on your life and livelihood.

Our staff understands that facing criminal charge is a frightening experienced. However, if you retain attorney David L. Freidberg, you can be assured that your criminal case will be rigorously defended. Attorney David L. Freidberg has defended thousands of people throughout Illinois and his team will aggressively fight for your freedom. Call or text our firm today at (312) 560-7100 or toll free at (800) 803-1442 to receive your free, confidential free consultation today.