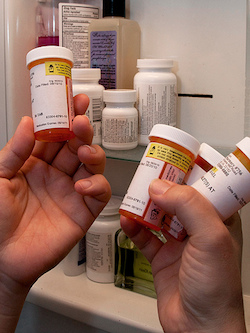 While prescription medications are considered “controlled substances” under Illinois drug laws, those arrested for unlawful possession of a prescription drug often are those with no criminal history who have successful careers. Many people develop chemical dependency on prescription drugs while under a doctor’s care for a serious injury or illness. There are a wide range of pain medications and other prescription drugs that are highly addictive so people struggle to discontinue these drugs following legitimate therapeutic treatment.

Our experienced prescription drug possession attorneys understand that many people facing criminal charges in Illinois based on their possession of prescription medications need assistance recovering from drug dependency as opposed to punishment in jail or state prison. Unfortunately, police and district attorneys are increasingly aggressive in prosecuting those accused of prescription drug offenses. Our Chicago prescription drug possession attorneys work diligently to protect our clients’ freedom, future and reputation. During his more than 20 years of practicing law, David L. Freidberg has acquired the skills and experience, which has allowed him to develop a reputation for providing legal services consistent with the highest standards of professionalism, zealous advocacy and commitment to protecting the rights and freedom of his clients.

While there are many types of prescription drugs that may be the basis for an unlawful possession charge, the penalties associated with each drug generally depend on the means used to unlawfully acquire the drug as well as the type of drug. Controlled substances are classified into categories ranging from I-IV depending on their therapeutic value, addictive qualities and potential risks. Schedule I drugs generally refer to street narcotics like heroin, methamphetamine, cocaine, ecstasy and similar “hard” drugs with a high degree of risk, no medical benefits and powerful addictive qualities. Prescription drugs typically are Schedule II-IV drugs. Possession of a Schedule II drug will result in more serious criminal exposure while possession of a Schedule IV drug is considered a less serious drug possession offense.

Sentencing Exposure for Possession of Controlled Substances without a Valid Prescription

Under the sentencing guidelines for prescription drug possession, a conviction can result in a sentence that ranges from a Class 4 felony to a Class X felony. The sentencing guidelines impose a sentence of one to three year years in state prison and/or a fine of up to $25,000 for a Class 4 felony. If you are convicted of a Class X felony, you face criminal exposure of six to thirty years in the state penitentiary and a fine of $25,000. Because these are only sentencing guidelines, it is imperative to obtain prompt legal representation if you are accused of unlawful possession of a prescription medication via fraud, other illegal means, or even if you have a valid prescription from your physician.

Depending on the specific circumstances of your Chicago prescription drug case, certain penalty enhancements may apply. If you are arrested for possessing a prescription medication unlawfully while in possession of a firearm, the judge may double your sentence. The judge may also impose this harsh doubling of your sentence if you are arrested within 1,000 feet of a movie theater, church, school or park.

When you are arrested for possession of a significant quantity of a prescription medication or have several types of such medications in your possession, you may face the more serious penalties associated with intent to distribute charges.

If you are accused of unlawful possession of prescription medications, the most important step you can take to protect your liberty and reputation is to immediately cease all contact with the police or other authorities, including the State’s Attorneys office, and call experienced Chicago prescription drug crime lawyer David L. Freidberg. The sooner you contact us the better as we may be able to engage in pre-charge intervention. Our Cook County prescription fraud attorneys take an aggressive approach at the investigatory pre-charge stage because we are often able to convince the prosecutor to bring fewer or less severe criminal charges. While our goal is to aggressively seek a basis for obtaining a dismissal of charges or acquittal, we are prepared to pursue a positive negotiated plea that keeps you out of jail or state prison.

We invite those arrested for prescription related drug offenses in Chicago or the surrounding areas to speak with one of our Chicago prescription drug possession attorneys. We offer a confidential consultation that is free of charge. Please contact us at 312-560-7100, 24 hours a day, 7 days a week, or email us to learn how we can help.