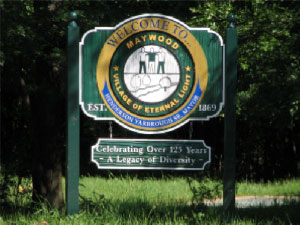 Maywood, Illinois is a small Chicago suburb with a population just shy of 25,000. Despite its relatively small size, Maywood is home to soaring crime rates that are higher than national averages. In fact, violent and non-violent felonies and misdemeanors occur twice as often in Maywood than in the average American town. For instance, in 2010 alone, 207 arrests were made for violent crimes. Of these 207 arrests, 6 were for murder, 18 for rape, 90 for robbery, and 93 for assault and battery. As such, Maywood, Illinois is currently ranked the 15th most dangerous city in the state.

When a call to 911 is made, officers will be dispatched to the Maywood address provided in order to investigate. If the suspect is at the scene and there is probable cause for an arrest, the officers will arrest the suspect. The suspect will be brought to the precinct for either the Cook County Sheriff’s Office or Maywood Police Department, and processed through booking. This involves fingerprinting, mug shots, and gathering biographical data.

If the suspect is not at the scene, the officers may request a search warrant or an arrest warrant from a Maywood judge. This judge, as part of the Circuit Court for the Cook County court system, will review the request and will only issue the warrant if probable cause exists to conduct a search or arrest.

Following an arrest, you will be arraigned at the Maywood Courthouse, located at 1500 Maybrook Avenue, Maywood, Illinois 60153. The Maywood Courthouse is also known as the Fourth Municipal District Courthouse and is a branch of the Circuit Court for Cook County. Present at your arraignment and all subsequent court proceedings will be both a prosecutor and a judge. The prosecutor will be an assistant state attorney from the Office of the State’s Attorney, Cook County. 15 judges are housed at the Fourth Municipal District Courthouse in Maywood. 9 of these judges are Circuit Judges, and 6 are Associate Judges. The Honorable Cheryl D. Ingram is the presiding Circuit Judge over the Maywood Courthouse.

When you are arraigned, the assistant state attorney for Cook County may request that you be held pending trial or that you be released but with onerous release conditions. The Maywood judge is not required to acquiesce to these requests but can take them under advisement. As such, it is critical that you have a knowledgeable and skilled Maywood criminal defense attorney ready and available to fight for your rights at the onset of your case.

After you are arraigned, you will likely appear before the Maywood judge several more times. If you are released, you may be supervised by the Adult Probation’s pretrial service office for the Fourth Municipal District Courthouse for Maywood. Your release conditions may include reporting in-person or by phone, drug testing weekly or undergoing substance abuse or mental health treatment. If you are held pending trial, you will likely be detained at the Cook County Jail, which is located at 2700 S. California, Chicago, Illinois 60608.

At your next hearing, your defense attorney will enter an appearance if he has not already done so. This hearing will likely be one of several status hearings designed to get both the Maywood prosecutor and your defense attorney on the same page. This means negotiating a plea offer or diversion and handling discovery issues. If you enter into diversion, you will be permitted to participate in a special program like community service in exchange for having your charges dropped. If you enter a guilty plea, you will proceed straight to sentencing but will likely receive a reduced sentence for accepting responsibility.

If you decide to reject all offers and instead proceed to trial, the judge will schedule a trial. Prior to trial, there may be motions hearings, such as a motion to suppress tangible evidence hearing. This type of motion is designed to exclude illegal contraband from evidence because certain constitutional rights were violated.

At trial at the Maywood Courthouse, your criminal defense attorney will attempt to undermine the prosecutor’s case by impeaching government witnesses, presenting evidence and testimony that casts doubt on the government’s theory, and arguing that the government has not met its burden of proof.

If you are acquitted following trial, congratulations! Your case is over. If you are convicted, you will proceed to sentencing. A commonly requested sentence is probation. Probation is supervised by the probation office in the Fourth Municipal District Courthouse. Another sought-after sentence is time served, which is largely only desirable for cases involving defendants who were detained pending trial. In addition to these two options, a plethora of other possible sentences exist, such as incarceration, community service, restitution, and more.

David L. Freidberg has over 20 years of experience with litigating in the Circuit Courts for Cook County, including the Maywood Courthouse. With a knack for litigation and a proven track record of acquittals, dismissals, and reduced sentences, David L. Freidberg is ready to provide you with the effective and aggressive representation you need in your Village of Maywood criminal case. To schedule a free case consultation at the office nearest you, contact The Law Offices of David L. Freidberg at (312) 560-7100 or (800) 803-1442. We are available 24/7 for your convenience.