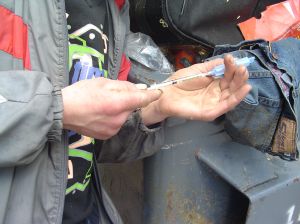 While state and federal law enforcement agencies are very aggressive about building drug cases and making arrests, these police and drug enforcement agencies are even more tenacious when the drug is a “harder” more addictive narcotic like heroin. If you are arrested and charged with possession of heroin in Chicago, throughout Cook County or the surrounding areas of Illinois, you may be charged with a felony for even small quantities of heroin. If you are arrested while in possession of 0.2 grams of heroin, you will be charged with a felony. The prosecutor may even charge a felony if you are arrested with heroin residue in a baggie or balloon.

If you are arrested with heroin, you may be charged with either a state or federal crime. While all prosecutors are zealous about pursuing criminal prosecutions against those charged with possession of heroin, federal prosecutors are especially skilled at pursuing these cases and have access to extensive investigative and prosecutorial resources. If you are convicted of a heroin charge in federal court, you may be sentenced to a lengthy term in federal prison, serious fines, property forfeiture and/or felony probation.

Experience and Early Intervention May Prevent Chicago Heroin Charge ConvictionsChicago heroin possession attorney David L. Freidberg relies on over 20 years of legal experience. He has a deep understanding of the types of improper police procedures, evidentiary issues and Constitutional violations that may provide the basis for an effective defense. Because of the serious consequences that result from conviction of a drug-related crime involving a Schedule I narcotic under the federal Controlled Substances Act (CSA) like heroin, you will want to contact Mr. Freidberg even if you are only under a cloud of suspicion and have not yet been arrested. Mr. Freidberg can represent you if law enforcement officers attempt to question you so that he can limit the scope of the inquiry to reduce the risk of arrest and formal charges. He also can challenge searches of vehicles, homes, offices and even your person. These pre-charge tactics can sometimes prevent formal charges, reduce the number of charges or result in less serious charges. Schedule I drugs like heroin are considered the most serious types of narcotics so law enforcement authorities are extremely aggressive about pursuing these drug charges. The classification of heroin as a Schedule I controlled substance means the following:

At our Illinois heroin possession law firm, we understand that heroin is highly addictive and that people struggling with charges involving this illegal drug are not bad people but often merely trapped by a chemical dependency they cannot escape. While our goal is to prevent the serious consequences associated with a criminal conviction for even small amounts of heroin, we pursue options that emphasize drug treatment and rehabilitation over incarceration where an acquittal or dismissal of charges is not a viable option.

What Penalties and Long-Term Consequences Do I Face If Arrested with Heroin?

While the penalties associated with being caught with heroin are extremely harsh, the precise terms depend on the quantity of the illegal drug in your possession. All of the offenses below are felonies under Illinois law:

These penalties increase significantly if the drug offense is committed under specific aggravating circumstances. If you are in possession of the controlled substance within 1000 feet of a school, park, movie theater or church, you face exposure to double the prison term and fine. The same is true if you are in possession of a firearm when you are arrested for possessing heroin. This can increase the charge to one of armed violence. Any possession of a firearm while in the commission of a felony can increase the charge to armed violence and result in increased prison time with no probation available.

While these are intimidating penalties, there are longer term consequences that you may experience throughout your life if you are convicted after being arrested because you have heroin. Some of these long-term adverse consequences that may impact your future include the following:

If you have been arrested after heroin was located in your residence, place of work, automobile or on your person, you may be justifiably worried about your future. Given these harsh formal penalties and long-term consequences, your fears and concerns are understandable. However, there are a wide array of potential substantive and procedural defenses that Mr. Freidberg may assert to protect your rights, liberty and reputation. Some of these defense strategies may include but are not limited to the following:

Our Cook County drug defense law firm handles all types of drug offenses related to heroin charges including possession, sales, distribution and other narcotics offenses. Mr. Freidberg practices exclusively criminal defense so that he can focus all of his resources and efforts on protecting the Constitutional rights and futures of his clients. If you are arrested with heroin in Chicago or the surrounding areas, you should immediately indicate that you do not want to answer any questions and request a Chicago drug crimes lawyer. We offer a free consultation that is absolutely confidential so that we can assess your situation and explain your rights and potential defenses. Call us at 312-560-7100 or email us so that we can start fighting to protect you.