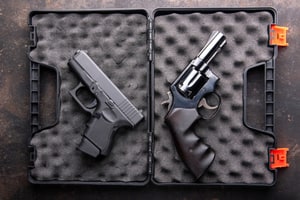 The ownership of firearms is often the subject of heated debates throughout the United States. Regardless of your position on guns, however, firearms trafficking is illegal in the state of Illinois. If you have been charged with firearms trafficking, you face serious penalties, such as prison time. Attorney David L. Freidberg has represented clients in Chicago, Cook County or DuPage County area for more than 20 years and is ready to help you fight your firearms trafficking charges.

There are several laws that criminalize firearms trafficking in Illinois.

Unlawful Purchase of a Firearm

Under 720 ILCS 5/24-3.5(b), it is illegal to knowingly buy or attempt to buy a firearm for another individual if that individual is legally barred from owning a firearm under state or federal law.

Additionally, 720 ILCS 5/24-3.5(c) states that intentionally providing fake or misleading details on a Bureau of Alcohol, Tobacco, Firearms and Explosives record while trying to purchase a firearm is also illegal.

An individual who violates this law may be convicted of a Class 2 felony if the individual is trying to purchase a firearm. Class 2 felonies are punishable by between 3 and 7 years in prison.

If the individual is purchasing between two and five firearms (in a single year), the crime is a Class 1 felony. Class 1 felonies are punishable by between 4 and 15 years in prison.

If more than six firearms were purchased within a two-year period, the crime is a class X felony, which is punishable by between 9 and 40 years in prison.

According to 430 ILCS 65/6.1(a) and (b), it is illegal to forge or alter a Firearm Owner’s Identification (FOID) card. It is also illegal to knowingly possess such a card if the possessor intends to use it to purchase a firearm or ammunition.

This crime is a class 2 felony, which carries between 3 and 7 years in prison.

720 ILCS 5/24-5(a) and (b) add that it is a crime to intentionally or knowingly alter, remove, change, or obliterate a serial number on a firearm. It is also illegal to own such a firearm.

An individual convicted of defacing identification marks of a firearm is guilty of a class 2 felony, which carries between 3 and 7 years in prison.

Unlawful Sale or Delivery of a Firearm

720 ILCS 5/24-3(A)(l) criminalizes the delivery of a firearm, if the deliverer knows that it has been stolen or converted and is not supposed to be in possession of the firearm.

If one firearm was delivered, the crime is a class 2 felony, punishable by between 3 and 7 years in prison.

The crime is a class 1 felony, which carries between 4 and 15 years in prison, if the delivery was for between two and five firearms which occurred within a single year.

If more than six but less than ten firearms were delivered within a two-year period, the crime is a class X felony, punishable by between 6 and 30 years in prison.

If between eleven and twenty firearms were delivered, the crime is a class X felony, which carries between 6 and 30 years in prison if the deliveries occurred within a three-year period.

If between twenty-one and thirty firearms were delivered in a four-year period, the crime is a class X felony, which carries from 6 to 50 years in prison.

If more than thirty-one firearms were delivered in a five-year period, the crime is a class X felony. Offenders may be punished to a prison sentence of between 6 and 60 years.

Illinois Enacted a New Law in 2016

If an individual does not have a FOID card and brings a firearm or ammunition into Illinois, that individual may be charged with firearms trafficking if the person intends to sell, deliver, or transfer the firearms or ammunition to another person.

Firearms trafficking is a class 1 felony, punishable by between 4 and 20 years in prison.

What to Do if You Have Been Charged with Firearms Trafficking

If you have been charged with firearms trafficking, you need to speak with an experienced Chicago criminal defense attorney right away to ensure your legal rights are thoroughly protected.

As outlined above, there are serious penalties in place for various types of firearms charges in Illinois. Without proper legal counsel, you could face serious prison time and become a convicted felon.

Your attorney handles every phase of your case, from initiation to conclusion. Your attorney will provide you with instructions if you must go to court for a hearing or trial.

If You Have Been Charged with Firearms Trafficking, Call David L. Freidberg Today

Attorney David L. Freidberg has an excellent reputation in the Chicago area for his zealous representation of his clients. David L. Freidberg has been in practice for more than 20 years and has experience in numerous weapons cases. If you have been charged with firearms trafficking, contact us or call us at 312-560-7100 today to schedule a free consultation to discuss your legal options. There is little time to waste with firearms trafficking charges.