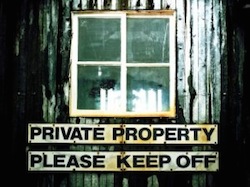 The crime of criminal trespass to land is a misdemeanor offense that can lead to up to a year in jail, hundreds of dollars in fines and fees, and civil liability. Criminal trespass to real property or land is a serious offense that can cost you greatly in the long run. Along with the potential for jail time and monetary fees, a conviction for trespass to land can serve as a predicate in the event you are arrested for a subsequent crime. Though this offense should be taken with seriousness, defendants charged with criminal trespass to land should rest assured that not all hope is lost. There are several defenses available against the charge and a skilled criminal defense attorney can fight to see the charge dismissed or minimal penalties imposed.

The criminal defense lawyers at The Law Offices of David L. Freidberg have decades of experience representing defendants against the charge of criminal trespass to land. Our attorney team extensively investigates each case and, armed with this knowledge, mounts a fervent defense. The Law Offices of David L. Freidberg has successfully obtained acquittals for several clients charged with criminal trespass to land as well as favorable plea deals.

Criminal Trespass to Real Property: An Overview of Illinois Law

Generally, to be convicted of the crime of trespass to land (not a building), the prosecutor must show the defendant had notice that entry is forbidden. An individual will be found to have notice if they are notified personally, either in writing or orally, including a court order, or if a printed or written notice stating no trespassing has been posted. To be valid, the notice must be clearly posted or exhibited at the main entrance to the land or on the forbidden part of the land.

In the alternative, the owner or lessee of real property can place identifying purple marks on trees or posts. The marks must be vertical, at least 8 inches in length, and the bottom no less than three feet. They should be readily visible to someone approaching the property. In the alternative, the marks can be placed on the top two inches of a capped post. Along with these markings, the owner must still provide notice, as described in the paragraph above.

Exceptions and Defenses to the Criminal Trespass to Land Charge

There are several important exceptions to the trespass to land charge which make it legal for others to enter or remain on the property of another. Further, there are numerous defenses that one charged with the crime can raise. The following is a list of exceptions and defenses:

Punishment for Criminal Trespass to Land

Criminal trespass to land is generally a Class B misdemeanor, but will be a Class A offense for those who enter or remain on agricultural property with a motor vehicle, including a moped, motorcycle, or other two wheel vehicle. A Class A misdemeanor is punishable by a term of imprisonment of up to one year, up to two years of supervised probation, and a fine of up to $2,500. A Class B misdemeanor can result in a sentence of six months in jail, up to two years probation, and a fine of up to $1,500.

In addition, those who enter the land of another with a motor vehicle can be civilly liable for any damages made to the property, as well as the property owner’s court costs and fees.

While these punishments can have a serious impact on your life, livelihood, and freedom, with the help of a skilled criminal defense attorney you can mount a strong defense to your charge of criminal trespass to land.

For over 20 years, Chicago criminal defense attorney David L. Freidberg has used his vast experience in representing clients charged with criminal trespass to land. Our experienced criminal defense attorneys have an unsurpassed wealth of knowledge concerning the law relating to the crime of criminal trespass to land and all possible legal and rational defenses. The seasoned defense attorneys at The Law Offices of David L. Freidberg disseminate every pertinent factor with regard to your case. As a result of this meticulous investigation, we often uncover vital exculpatory evidence, evidence that can help you prevail at trial. Mounting a zealous defense to achieve the best possible outcome for our clients is our primary goal. Each specific case requires a different defense, and the nature of such depends on the particular set of facts under which you have been charged. Oftentimes we will seek to have the charges dropped based on lack of credible evidence. Our firm views being charged with a misdemeanor just as seriously as we would if the matter was a felony charge. We will defend you in your Chicago criminal trespass to land charge with the same aggressive defense as we would a felony charge, because we know the serious ramifications even a misdemeanor charge can have on your freedom and livelihood.

Facing a criminal charge can understandably be terrifying, especially if you have never been charged with a crime in the past. Rest assured, with the zealous representation of attorney David L. Freidberg, your case will be defended to the fullest extent. David L. Freidberg has successfully defended thousands of clients and will aggressively fight for your freedom. Contact us or call us today at (312) 560-7100 to schedule your free consultation. We are available day and night for your protection.