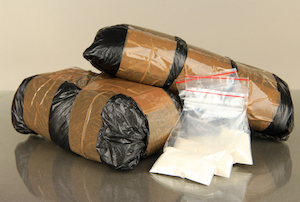 The federal crime of Continuing Criminal Enterprise (abbreviated as the CCE Statute) targets large-scale drug traffickers who are responsible for extensive drug conspiracies. The CCE covers just major narcotic organizations, setting it apart from the RICO Act. This act makes it illegal to commit or conspire to commit a series of felony violations of the Comprehensive Drug Abuse Prevention and Control Act of 1970. Those convicted of this serious crime could face up to a mandatory minimum of 20 years imprisonment and a maximum of life imprisonment. Tremendous fines of up to $2 million can also be lobbed and violators of this federal statute could be subject to forfeiture of profits. Under a new “super kingpin” provision added to the statute, certain offenders could be sentenced to mandatory life sentences without the possibility of parole.

Anyone charged with the crime of Continuing Criminal Enterprise must retain the assistance of an experienced criminal defense attorney who is well-versed in the unique area of federal criminal law as soon as possible. At The Law Offices of David L. Freidberg, we understand the high stakes that accompany a CCE Statute charge. We will aggressively defend you in federal court, seeking dismissal of the charges, lesser charges, a favorable plea deal, or a not guilty verdict at trial. Our vigorous defense strategy has had much success with even the most severe of cases.

The Continuing Criminal Enterprise Statute was passed in 1970 as a part of a comprehensive legislative movement aimed at drug abuse prevention and control. The law is contained in Title 21 of the United States Code, 21 U.S.C. § 848.

The CCE Statute makes it a federal crime for anyone to commit or conspire to commit a series of felony violations of the Comprehensive Drug Abuse Prevention and Control Act of 1970 when these acts are taken by five or more persons. To be convicted under the statute, the individual charged must have been a manager, organizer, or supervisor of the continued operation. He or she must additionally have obtained substantial income or resources as a result of the drug violations. Accordingly, lesser involved individuals in the drug ring could not be convicted of this offense, though other charges would apply.

A so-called “super kingpin” provision was added to the CCE statute in 1984. It allows for enhanced penalties for the principal organizer, leader, or administrator of a criminal enterprise involving narcotics of a large scale or generating over $10 million in gross receipts for a single year.

The CCE statute is among the most severe of all federal criminal charges. A CCE offender will face a mandatory minimum sentence of 20 years imprisonment and a maximum sentence of life imprisonment. Those convicted will additionally face fines of up to $2 million and forfeiture of any interest in the drug enterprise. This could equate to millions of dollars for those individuals that have profited significantly from the drug enterprise.

Upon a second conviction under the CCE statute, you will face a minimum sentence of 30 years in prison and will be forced to forfeit all profits and assets associated with the enterprise.

So-called “super kingpins,” or leaders of organizations that involve large amounts of narcotics or considerable profits, must serve a mandatory life sentence without the possibility of parole. The offender is absolutely not eligible for release while alive when this extreme sentence is imposed. Additionally, if anyone engaging in the continuing criminal enterprise intentionally kills another person or causes their death, they may receive the death penalty. Parole, suspension of sentence, or probation will not be allowed for those convicted of this crime.

The charge of Continuing Criminal Enterprise is a complex, multi-faceted one. It is generally reserved for the organizers of large scale drug enterprises, but occasionally this charge will be lodged against low level offenders caught up in bigger investigations. If you have been charged under the CCE statute, your freedom and future are at stake. This serious offense could lead to decades if not life imprisonment. Though the charge is complex and the stakes are high, an experienced criminal defense lawyer can launch a strong defense.

In order to be convicted of this crime, the prosecution must prove that you committed a previous offense and then subsequently committed a pattern of related drug offenses. Your defense attorney will investigate every detail of the case and any alleged connection to drug dealing in Illinois in order to protect you from a wrongful conviction.

There are several elements that a defense attorney can challenge with a CCE charge. First, the prior offenses must be related and occur over a definite period of time. Proof of isolated drug offenses will not be sufficient to convict a defendant of this crime. Further, the accused must work with at least five other people. Next, the defendant needs to be an organizer or supervisor of the organization. This is often a key element to contest for clients who were involved in the organization but did not play a leadership role. If the prosecution cannot establish a senior role, a conviction under the CCE statute cannot stand. Evidence that the defendant worked acted as supervisor or organizer could include instructing others in an employer type capacity, making arrangements for money laundering, negotiating substantial purchases, and the like.

At The Law Offices of David L. Freidberg, our federal drug crimes attorneys understand the seriousness of CCE charges and the severe penalties faced by those convicted of this crime. We bring decades of experience to the table and will mount a strong defense against any federal drug charges, seeking to keep you out of jail, protect your assets, and prevent a federal conviction from marring your permanent criminal record. With our assistance, you can mount an aggressive and powerful defense against these solemn charges and know that you have fought to the fullest to avoid conviction.

The Continuing Criminal Enterprise Statute is a federal law that punishes large scale drug traffickers. This serious crime can result in a mandatory minimum sentence of 20 years in prison and fines of up to $2 million. Courts will also generally require forfeiture of all profits and interests associated with the enterprise. The Criminal Defense Attorneys at The Law Offices of David L. Freidberg have assisted clients with all manner of serious felony charges for almost 20 years. We have the skill and knowledge to tackle even the most severe and complicated federal charges, including continuing criminal enterprise. Our dedicated criminal defense lawyers will fight vigorously to see that you achieve the best legal outcome. We are available 24 hours a day, 7 days a week to assist in your defense. To schedule your free consultation, call us today at (312) 560-7100 or toll free at (800) 803-1442. You may additionally contact us via email and we will respond as soon as possible.