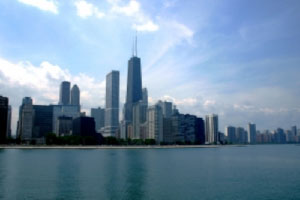 The bustling metropolis of Chicago boasts over 2.7 million residents in its core area and over 10 million residents in the entire metropolitan area, which is lovingly referred to by locals as Chicagoland. This ranks Chicago as the largest city in the state of Illinois and the entire Midwest region, as well as the third largest city in the U.S. With a large and diverse urban population come staggering crime figures. Chicago, Illinois is divided into 77 individual neighborhoods, each with its own unique identity. Crime rates are highest in West Garfield Park, East Garfield Park, West Englewood, Englewood, Greater Grand Crossing, Woodlawn, Chatham, Washington Park, and Fuller Park. In these communities, there are 3,500 to 4,000+ violent crimes committed per 100,000 residents each year.

While the city of Chicago has seen a fairly drastic drop in crime of over 33% in the past 3 years, this drop can be attributed to lower crime rates for theft-related offenses such as burglary, theft, grand theft auto, and robbery. However, violent crimes such as murder, criminal sexual assault, and aggravated battery remain fairly consistent throughout the years. 2014 ended with 407 murders, 1479 criminal sexual assaults, and 6470 aggravated batteries in Chicago proper, according to the Chicago Police Department .

When crime rates are high, the state of Illinois and the city of Chicago pool resources into the Chicago Police Department and Office of the State’s Attorney – Cook County in order to crack down on crime and deter future offenses. With over 14,000 employees, including approximately 12,300 police officers, the Chicago Police Department is the second largest municipal police department in the U.S. The Chicago P.D., established in 1835, is overseen by the Mayor’s Office. The Superintendent of Police, Garry F. McCarthy, leads the four individual police bureaus, which include the Bureau of Patrol, the Bureau of Detectives, the Bureau of Organized Crime, and the Bureau of Support Services. Each bureau is overseen by a bureau chief.

Police officers are assigned to specific districts. There are 22 districts total that span an area of 237 square miles. The police officers for a particular district will be responsible for patrolling it and conducting investigations. As one of the largest police departments, the Chicago P.D. has an operating budget of approximately $1.3 billion annually. Given its size, unilateral power, and infinite resources, the Chicago P.D. is a formidable force.

The Cook County State’s Attorney’s Office is tasked with prosecuting all misdemeanors and felonies that occur inside Cook County lines. As the largest city in Cook County, Chicago is home to a vast majority of these crimes. The assistant state’s attorneys have the power to prosecute crimes, pursue unpaid child support, sue individuals and facilities accused of elderly abuse or neglect, handle domestic violence and abuse cases, and represent Chicago in any lawsuits.

The Cook County State’s Attorney’s Office contains seven main bureaus. The Criminal Prosecutions Bureau focuses on violent and non-violent misdemeanors and felonies, traffic violations, city ordinance violations, and victims’ assistance. The Juvenile Justice Bureau handles crimes committed by juveniles, delinquent juveniles, and abuse and neglect by parents. The Special Prosecutions Bureau focuses on more complex and expansive criminal operations, such as gangs, drug cartels, and public corruption. The Narcotics Bureau focuses solely on drug-related offenses and treatment. The Civil Actions Bureau handles all of the civil suits filed against Cook County and the city of Chicago. The Investigations Bureau are specially sworn officers who work on investigating and preparing cases for trial. The Administrative Services Bureau focuses on the administrative tasks and operations associated with running the office.

All criminal and civil cases are litigated at the Circuit Court for Cook County, Illinois. Cook County has over 400 judges serving at 6 different courthouses, the busiest of which is located in the City of Chicago. The First Municipal District Courthouse – Chicago , 50 West Washington Street, Chicago, Illinois, 60602, is also known as the Richard J. Daley Center. The other five municipal district courts cover the northern, northwestern, western, southwestern, and southern suburbs of Cook County. The First Municipal District handles, among other types of cases, felony preliminary hearings, misdemeanors, and traffic violations. Felony jury trials are handled by the other municipal districts.

In addition to courtrooms, the Chicago courthouse is home to a variety of non-judicial offices. One such office is Adult Probation . Adult Probation provides pretrial services and supervision in order to ensure that defendants released on personal recognizance will appear for court proceedings. The services are ordered by the judge as part of a defendant’s release conditions. Common Cook County pretrial conditions include:

Chicagoland Criminal Defense Attorney David L. Freidberg, a highly rated and respected criminal defense attorney, has served clients accused of committing criminal offenses in Chicago for over 20 years. Established in 2000, The Law Offices of David L. Freidberg strives to provide high-quality and personalized representation to vulnerable communities in Chicago. David Freidberg has a proven track record of success with arranging for dismissal of charges, negotiating plea bargains and diversion, winning motions to suppress, arguing for reduced charges, and advocating for acquittals. For a free initial consultation, contact The Law Offices of David L. Freidberg 24 hours a day, 7 days a week toll-free at (800) 803-1442, or locally at (312) 560-7100.