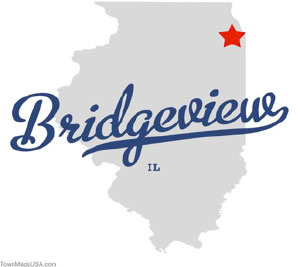 Bridgeview is a village in Cook County located about 13 miles north of the City of Chicago’s famed Loop area. Incorporated in 1947, Bridgeview has a diverse population of 15,000, which consists of many Polish, Hispanic and more recently Arab Americans. In fact, Harlem Avenue is now a major center of Arab American cultural life. Bridgeview is home to the Chicago Fire Soccer Club and Toyota Park, the preeminent venue for numerous concert events.

The Bridgeview Police Department handles much of the police duty in and around Bridgeview with assistance from numerous other police departments from the surrounding areas, such as Chicago Ridge, Countryside, Evergreen Park, Oak Lawn and Orland Park. Bridgeview is home to some of the Chicago drug crimes and violent crimes as Chicago, who’s crimes include anything from criminal sexual assault and murder. And because Bridgeview is home to a popular concert venue, there are often charges of criminal battery and public intoxication. These cases are held predominantly at the 5th District Courthouse located at 10220 South 76th Avenue, Bridgeview, Illinois 60455. While most of the Bridgeview, Stickney and La Grange felony offenses begin the criminal process with a preliminary hearing in courtroom 103 at the 5th District Courthouse, there are some cases that have their preliminary hearings at Branch 38, located in Chicago at 727 E. 111th Street, Chicago, Illinois 60628. These are considered Chicago cases but have their trials held in Bridgeview due to overcrowding at the main courthouse, 26th and California. If probable cause is found at the preliminary hearing stage, the cases are then assigned to a judge located at the Bridgeview Courthouse.

Because Bridgeview is located in Cook County, Illinois, those arrested for a felony criminal offense in Bridgeview and the surrounding suburbs are booked into the Cook County Jail, otherwise known as the Cook County Department of Corrections (CCDOC), located at 2700 S. California, Chicago, Illinois 60608. The Cook County Jail is situation on 96 acres in Chicago and annually admits 100,000 detainees and averages a daily population of 9,000. Anyone looking to find out more information regarding an inmate, his or her charges and the next court date and location can use the Inmate Locator. This locator will also state the inmate’s bond amount for release from custody. Those seeking release from the CCDOC will be required to post 10% of the stated bond amount. The bond can be used to pay attorneys fees and/or court costs and fees. If a case is dismissed or there are no fees or costs assessed to the defendant, whoever posts the bond will have the bond amount returned, less a 10% fee assessed by the Court.

Bridgeview Criminal Law Attorney David L Freidberg has been active at all of the Chicago courthouses for over 20 years and has developed bonds with both the prosecuting attorneys as well as court personnel. Mr. Freidberg’s reputation as a defense attorney is highly regarded by his peers and his clients. He will leave no stone unturned in defending your constitutional rights and liberty. Mr. Freidberg is available 24 hours a day, 7 days a week for your protection. Do not hesitate to contact Mr. Freidberg at (312) 560-7100.