The involvement of a dangerous weapon with the commission of most felonies under Illinois law may result in significant jail time that could ultimately ruin your life, and the lives of your loved ones. Illinois takes armed violence and the possession of dangerous weapons very seriously given that many people have lost their lives due to armed violence.

While there are certainly people out there who have unnecessarily caused harm to others through armed violence, there is also an astounding number of Illinois residents who have been wrongly charged, and wrongfully convicted of armed violence. As such, it is essential that individuals charged with armed violence consult with a Chicago Criminal Defense Attorney as soon as possible. The stronger your attorney is, the more likely it is that you will receive the best representation possible to seek dismissal of your claim, or negotiate a lesser charge that reasonably fits the conduct in question.

The Elements of Armed Violence Under Illinois Law 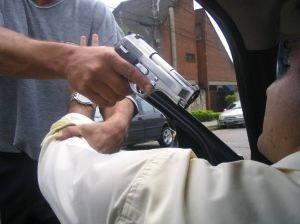 Under Illinois law, 720 ILCS 5/33A-2, an individual may be convicted of armed violence if he or she commits a felony while armed with a dangerous weapon, however, this excludes many serious felonies such as murder, predatory sexual crimes involving children, home invasion, among others. To find out what additional felonies might be excluded from an armed violence charge, it is important that you consult with a Chicago Criminal Defense Attorney who will be able to quickly determine whether or not the underlying offense can be linked to a charge of armed violence.

Under Illinois law, 720 ILCS 5/33A-1, a Category I weapon is a handgun, sawed-off shotgun, sawed-off rifle, any other firearm small enough to be concealed upon the person, a semi-automatic firearm, or a machine gun. A Category II weapon is any other rifle, shotgun, spring gun, other firearms, stun gun, a Taser, a knife with a blade of at least three inches in length, a dagger, a switchblade, and others.

Many individuals charged with armed violence in Illinois believe that a firearm must be involved. This is a common misconception because most people agree that firearms are more dangerous than other weapons. However, the Illinois legislature believes that being in possession of a switchblade can be just as dangerous as being in the possession of a rifle if the weapon was somehow involved or related to the commission of another felony. Your Chicago Criminal Defense Attorney will investigate the facts of your case to determine if the weapon at issue is one that triggers a charge of armed violence.

What Are the Consequences of Armed Violence in Illinois?

It is very important to understand that these are simply minimum jail sentences, so it is quite possible that an individual will receive a sentence of more than 15 years in jail, or perhaps even a life sentence. On the flip side, an individual convicted of armed violence could potentially receive a much lighter sentence if the underlying conduct in question does not result in serious harm to another individual. Therefore, while armed violence is one felony charge under Illinois law, the range in punishment greatly varies depending upon the individual facts of each case.

If you have been charged with armed violence in addition to another underlying felony, time is of the essence, and you need to consult with a criminal defense attorney right away. The early stages of the criminal process are crucial and have the biggest impact on your constitutional rights. Whether or not your rights have been respected through the arrest process will influence the outcome of your case. After consulting with a Chicago Criminal Defense Attorney, you will have a better understanding as to whether or not your arrest was lawful, whether or not the charges against you were legitimate, and whether or not there are grounds for having your case dismissed.

As with any arrest, the less you say before consulting with an attorney, the better. Police officers make mistakes frequently, whether intentional or not. One officer’s mistake could be the key to the dismissal of the criminal charges against you if the mistake has in some way violated your constitutional rights. With so much on the line, finding an excellent attorney is key to ensuring you reach the best result possible for your particular situation. While there are many wonderful lawyers in the Chicagoland area, having a criminal defense attorney who is familiar with Illinois felony charges, such as armed violence, will ensure that you have made the best decision possible to receive outstanding legal representation.

Being charged with armed violence is very serious and the consequences of a conviction could be devastating. With a criminal charge like this, you need a Chicago Criminal Defense Attorney who is highly experienced in handling these types of charges. A diligent, skilled advocate is who you need by your side, fighting for your rights. Never is there a more important time to ensure you have the best because you future is on the line. David L. Freidberg is a Chicago-based criminal defense attorney with more than 20 years of experience handling some of Illinois’s most serious criminal charges. We know that criminal matters occur at any time, day or night. As such, David L. Freidberg and his team are available 24/7 to provide you with the best advice and legal representation that you deserve. To speak with Mr. Freidberg about a criminal charge that you or a loved one is facing, contact our office today at (312) 560-7100 to schedule a free confidential consultation. You may also contact us via email and we will respond to your inquiry right away.